What is Human Trafficking?

Human Trafficking is a global atrocity that has awakened us as a Community and called us into action. Through force, coercion and fraud, women and children are sold into sex slavery, while other persons are trafficked for labor. Thousands of persons become victims. This underground industry generates $32 billion in profits each year because persons are reusable and resalable.

Our Chapter Directional Statement of 2011 challenged us to become educated and take action to address the issue of human trafficking. We are determined to continue working with medical professionals, educators, clergy, law enforcement and local residents, by forming partnerships to help identify victims, prosecute the Traffickers, and educate our communities.

The Human Trafficking Awareness Group is no longer actively meeting, though individual Sisters and Cojourners continue to monitor this issue.

Another name for human trafficking is Modern Day Slavery. By definition, a victim of human trafficking is one who has been forced, through fraud or other coercive means, into labor or sexual exploitation for commercial purposes. Victims of trafficking are looked upon as commodities because they can be sold and resold, over and over again. Trafficking of human beings is the second largest source of profit for international organized crime with revenue amounting to billions of dollars each year. Persons who are trafficked are mostly women and children (especially those between the ages of 11 and 18) as they are a key target group because of their marginalization, limited economic resources and vulnerabilities. They come from impoverished and low income households in rural areas and urban slums.

Rochester Franciscans have taken the first step by hosting conferences to raise the communities’ awareness about human trafficking on the local, regional and national level.

History of Events and Involvement 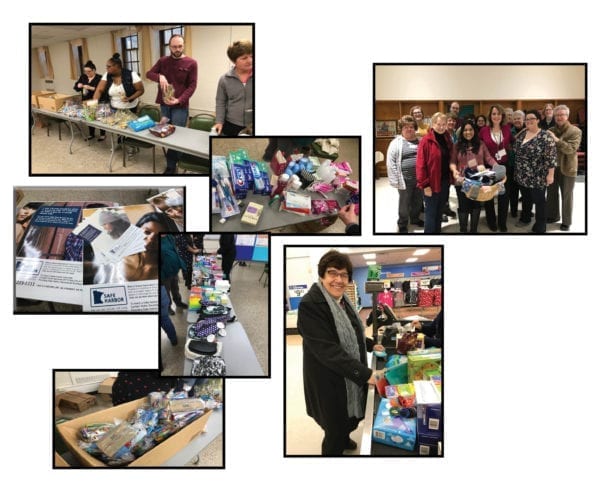 On January 14, 2017, over 100 persons attended a presentation by Chris and Anna Smith, Co-Founders of Restore One, sharing their work to provide housing programs for trafficked boys in America. They also introduced the trailer of their documentary, BOY$, currently in the production stage.

Restore One is a ministry based in Greenville, NC, opening shelters that offer faith-based residential recovery programs, free of cost, to American boys who are survivors of domestic minor sex trafficking (DMST). Restore One’s goal is to see survivors live in complete freedom, and to generate communities that are intolerable to the problem of human trafficking and human exploitation.

Since founding Restore One in 2012, Chris and Anna have worked alongside young men and boys as they move towards recovery. Through their encounters in the field, and personal experiences, they have noticed that many service care providers feel unequipped to work with sex trafficked males. They also has recognized that often the conversation surrounding services for sex trafficking survivors overlooks boys and men, resulting stigmas, lack of acknowledgment and scarcity of resources for this population. 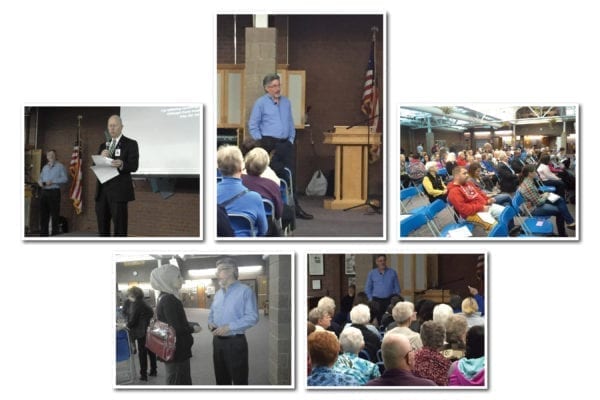 Trafficked Boys: Bringing Male Victims of Sex Trafficking Out of the Shadows, was another successful event!

Three presentations were held October 17-18, 2016, at Riverland College’s Frank W. Bridges Theatre in Austin, the Rochester Public Library, and RCTC’s Heintz Center, with over 300 in total attendance. As a child, Jerome Elam was a victim of sex-trafficking and shared his story from the perspective of a male survivor; one that is often not heard or discussed. We received a very positive response for all three events. Following his presentations, Jerome told us that he was impressed by the collaboration of various organizations in our community; which was not the case in many of the other cities where he’s made presentations.

“Trafficked Boys: Bringing Male Victims of Sex Trafficking Out of the Shadows”

“The Prostitution and Trafficking of Native Women in Minnesota”

Presented by Christine Stark, writer and women’s rights advocate, and co-author of “Garden of Truth: The Prostitution and Trafficking of Native Women in Minnesota.”

These individuals shared what their respective agencies do and how they work together strategically to ensure that our local community is being protected from human trafficking predators, to include:

Some of the answers may surprise you!

Kay Fate, reporter for the Rochester Post-Bulletin, served as our emcee and moderator. 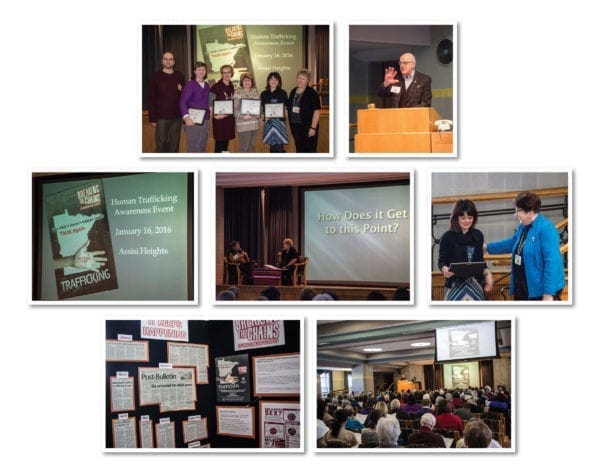 You think it doesn’t happen here? Think again, was another successful event!

A Young Woman’s Powerful Story
A young trafficked woman was imprisoned for vehicular homicide, and recently released. Hear her compelling testimony which helped convict her offender.

How Does it Get to This Point?
What makes the children vulnerable? Sister Briana McCarthy, Professional Licensed Clinical Counselor, interviews Kimber Schletty, Director of Community Education for Mission 21.

Composite Profile: Case Study of a Trafficked Girl
A dramatic presentation representing a composite of the experiences of various young women who have been trafficked in this region.

Making a Difference!
Recognizing those people and organizations who have made a difference in our local region. Appreciation for Raising Awareness in their Communities

Pornography Addiction: Gateway to Human Trafficking was another successful event!

Dr. Arne Graff, a Family Physician with fellowship training in Child Abuse Pediatrics, and the medical director for the Mayo Clinic Child and Family Advocacy Program in Rochester, MN.

Ellen Case, the Program Coordinator for the Mayo Child and Family Advocacy Program. 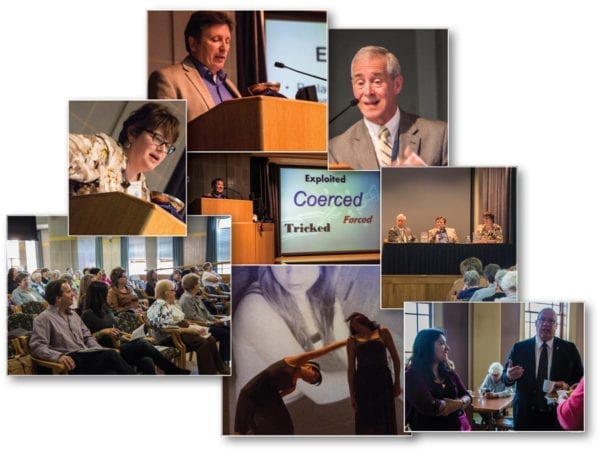 Sister Briana was also interviewed by Tracy McCray on KROC-AM radio on April 30th, along with regional navigator, Laura Sutherland.

The evening of the event, this was the lead story on KIMT-TV’s 10 PM newscast, which you can view here: http://kimt.com/2015/05/02/the-link-between-porn-addiction-and-human-trafficking/ 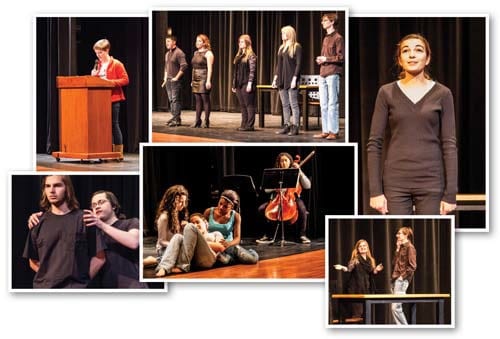 Sister Briana McCarthy was the catalyst that set things in motion for the One-Act Play Competition at Lourdes High School on January 31st. One of the students wrote the article “Stage productions remind us that human trafficking is real,” appearing in the Rochester Post-Bulletin on February 5: http://www.postbulletin.com/life/lifestyles/virginia-nowakowski-stage-productions-remind-us-that-human-trafficking-is/article_23a8ced4-0653-5b77-babc-e7a4d54d9c89.html At right is a photo representation of the plays – the students were amazing!

Mankato Free Press, Sunday, February 16, 2014: An article titled “Sisters to educate on human trafficking” featured an interview with Sister JoAnn Haney about the presentation to be held at Holy Spirit Retreat Center in Janesville. 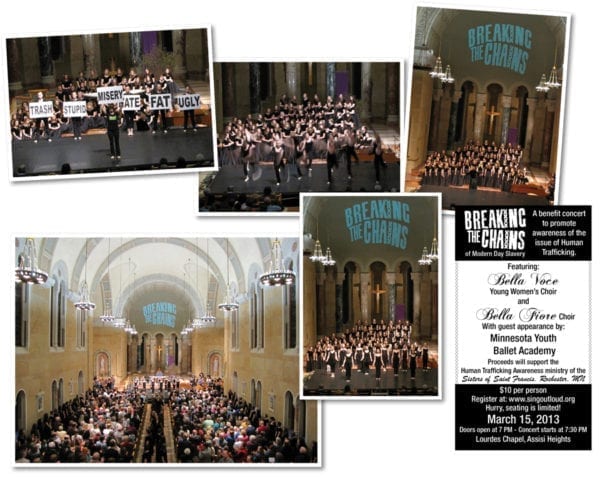 “… “Breaking the Chains of Modern Day Slavery: Part 2″ was an open-to-all event attended by more than 200 people. If what attendees wanted was information and resources to address this social ill, they left with that and a whole lot more. Once heard, insights shared by presenters about the sickening horrors of human trafficking cannot leave one’s mind.” 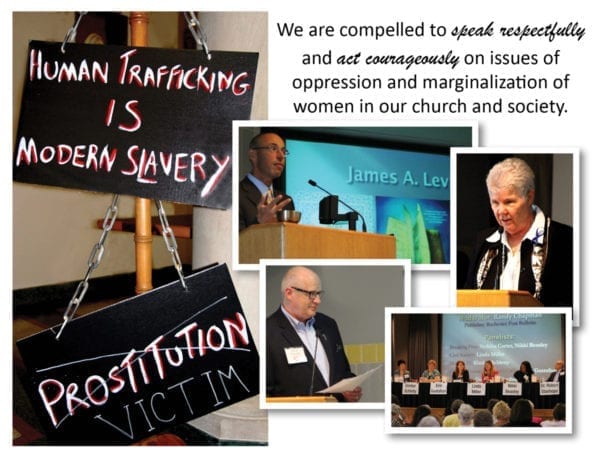 (5/2013) The Knights of Columbus of Rochester, MN, recently presented a check for $7500 to support the Human Trafficking Awareness ministries of the Sisters of Saint Francis. As stated by Tommy Carey, “Bob and I thoroughly enjoyed the opportunity to present the check to help provide awareness of a plague afflicting our country in Human Trafficking. Had the funds been available, the Knights would have provided 100 times that amount. All Knights join our Dear Friends at Assisi Heights in praying for an end to this horrible practice.” 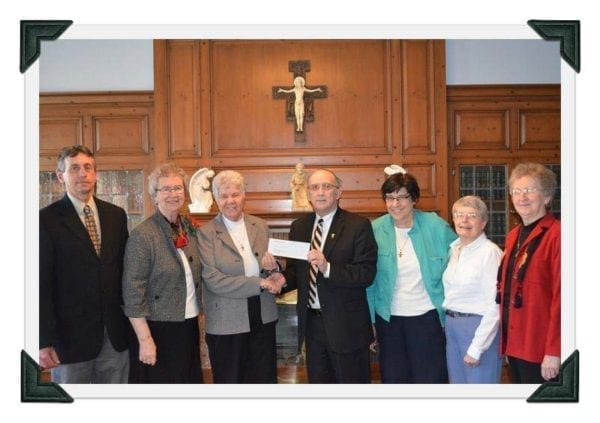 (5/8/2013) As seen in the May 8 issue of the Rochester Post-Bulletin: May 18 event to shed light on trafficking – Human trafficking may be the biggest issue of local concern that you know…

(3/22/2013) – Article written by Randy Chapman, publisher of the Rochester Post-Bulletin.
Click here for the article

(2/21/2013) – Benefit concert features choirs, dancers – Bella Voce choirs and dancers from the Minnesota Youth Ballet Academy present “Breaking the Chains of Modern Day Slavery,” a benefit concert March 15 at Assisi Heights. The concert is part of an effort by the Sisters of Saint Francis to raise awareness of human trafficking. Click here to view article.

Images from the March 2013 Concert

(2/15/2013) – Olmsted County Attorney Mark Ostrem’s op/ed article, “Sex trafficking victims need help and hope,” mentioned how the Sisters of Saint Francis provided him with an introduction to the issue of human trafficking. He also referenced Stacy, a survivor, and one of our January 2013 presenters, to help explain how this victimization can occur. Click here for the article. 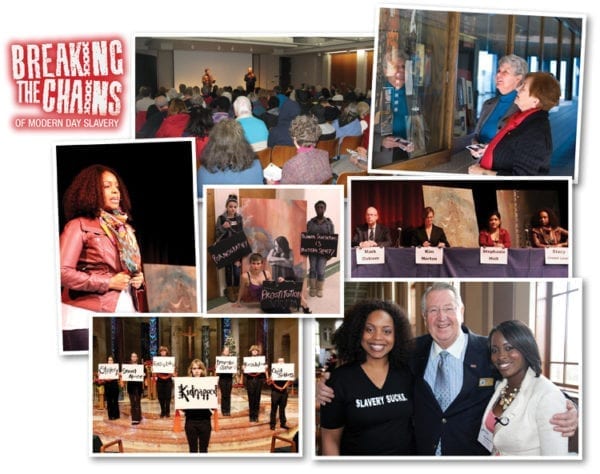 (1/14/13) – Solution to human trafficking is as difficult as the problem: The underground world of human trafficking, be it sexual exploitation or forced labor, is more widespread and pervasive in the Rochester area than many people realize. The solution is out there too, but it’s just as evasive.

(1/12/13) KAAL-TV: Minnesota is ranked as the nation’s 13th largest center for human trafficking…Watch the story

(1/8/2013) – Events on human trafficking cast spotlight on problems in Rochester: This article was on the front page, and featured an interview with Sister Anne Walch, along with a photo of Sisters Anne and Briana, as they were stationed at University Square on January 2, 4, 8 and 10 to ‘rally’ the public to raise awareness about Human Trafficking.